80 percent of businesses surveyed in research by the Economist Intelligence Unit and the Cybersecurity Tech Accord are concerned about falling victim to a state-sponsored cyberattack. They call for greater international political cooperation to mitigate these threats.

February 22, 2021, London, UK: A majority of businesses surveyed for a study by the Economist Intelligence Unit (EIU) and the Cybersecurity Tech Accord released today, see state-led and sponsored cyberattacks as a major threat. They are concerned about catastrophic reputational and financial consequences and call for greater international political cooperation to mitigate these threats.

The survey was conducted between November and December 2020, before the pernicious cyberattack on software company SolarWinds came to light. That attack was a moment of reckoning for many organizations about the challenges posed by state-led and -sponsored cyberattacks but, as the survey reveals, many businesses have long been aware of the escalating threat.

In recent years, cyberattacks led or sponsored by states have transformed cyberspace. This escalating conflict online has been accelerated by the wide-reaching consequences of COVID-19. In fact, almost 8-in-10 respondents say the pandemic has increased the likelihood of a state-led or -sponsored cyberattack on their organization.

Results show private sector leaders expect cyber threats by state actors to increase in the years ahead and want governments to implement effective policy solutions at the national and international level. In further detail, the key study findings are:

“Recent state-led and -sponsored attacks serve as a powerful reminder of an escalating problem that is too big to ignore,” said Brad Maiorino, executive vice president and chief strategy officer, FireEye. “There needs to be a fundamental shift in security planning beyond the efforts of any one organization, and this shift requires proactive and cooperative action from government and industry.”

“Although cyberattacks are a silent threat, they can have devastating and long-lasting effects on our society. Given the recent escalation of tensions in cyberspace, cooperation between governments is becoming increasingly complicated as political systems differ and technological competition rises,” said Marietje Schaake, president of the CyberPeace Institute. “This survey is an important call to action for democratic governments to step up and think more inclusively about the kind of cyber assistance they provide to protect companies in key sectors, and ultimately civilians.”

Since its inception, the Cybersecurity Tech Accord has highlighted this troubling situation, inviting governments to protect the online environment and refrain from using the internet as a domain of conflict, directly or through third parties. As an industry voice and staunch advocate for responsible behavior in cyberspace, the Cybersecurity Tech Accord has consistently called on governments to do more to defend against cyber-threats online, uphold international law, and implement international cybersecurity norms.

“As a coalition of over 150 global technology companies, we are greatly concerned by state-sponsored cyberattacks, which are becoming ever more frequent and sophisticated. Something needs to be done and soon,” said Annalaura Gallo, secretariat of Cybersecurity Tech Accord. “This survey shows that businesses see state-led and -sponsored cyberattacks as a pressing issue that demands governments act nationally and internationally. We need agreement at the United Nations and the involvement of business and civil society through multi-stakeholder forums, such as the Paris Call for Trust and Security in Cyberspace. We hope these survey results will be the start of a larger, global conversation around this important topic.”

The survey targeted over 500 director-level or above executives from businesses in Asia-Pacific, Europe, and the United States, familiar with their organization’s cybersecurity strategy and representing a wide range of industries, led by IT and technology, retail and consumer goods.

For a summary of key takeaways from the report, see the infographic here, and for full details, click here.

To learn more about the Cybersecurity Tech Accord, visit www.cybertechaccord.org.

Northwave is one of the signatory companies of the Cybersecurity Tech Accord:

In April 2018, 34 global technology and security companies signed the Cybersecurity Tech Accord, a watershed agreement and public commitment to protect and empower civilians online. Since then, this initiative has become the largest industry-led effort of its kind, with over 150 signatory companies across the world pledging to improve the security, stability, and resilience of cyberspace. More information can be found here.

About the Economist Intelligence Unit (EIU):

The EIU is the thought leadership, research and analysis division of The Economist Group and the world leader in global business intelligence for executives. The EIU uncovers novel and forward-looking perspectives with access to over 650 expert analysts and editors across 200 countries worldwide. More information can be found here. 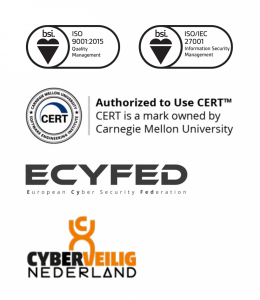